Playa Del Carmen was the first place we saw after we flew out from Havana, Cuba. Cuba was stuck in a time warp – an old, rugged Caribbean country trapped in time, crippled by US sanctions and suffering under Fidel Castro’s communist rule. The streets were made from dirt. Sometimes cobblestones guided the way from our casa to the endless array of living art; the people on the streets were institutionally poor, but if there was one neighbor they could count on, it was the Mexicans.

Fast forward to our landing in Mexico, and we can totally redefine what the term “culture shock” means. Playa Del Carmen literally overwhelmed our senses. We became uneasy. There were too many stores, too many restaurants, too many tourists, and too much wealth to comprehend after becoming so used to the most bare of commodities. It was a genuine shock to our systems, and I didn’t like it. The Mexico I envisioned wasn’t the one I found in Playa Del Carmen, but travelers more familiar with the nation are probably thinking “I could have told you that,” the same way I could tell people about Phuket, “well, you’re in for a treat!” PDC is cosmopolitan, and more similar to Santa Monica than anything else. It doesn’t feel like you’re in Mexico, it feels like you’re in a very enticing, beautiful, hectic party zone straddling along a blue, seaweed-riddled beach and obscenely overpriced restaurants. While it’s certainly not value for money and a poor representation of Mexico overall, it’s nonetheless worth checking out for a few days if, outside the blindingly white architecture (which is, I admit, nice to look at), you feel the need to pay ten times the amount for anything and everything, than you would in other parts of Mexico. A physical metaphor for PDC would involve me holding up a bunch of hundred dollar bills and burning them in front of your face. A physical metaphor for say, Tulum, would involve me holding up a bunch of hundred dollar bills and saying to you “You can have as much of anything as you like. Hell, you could live here for a month and still not spend it all!” 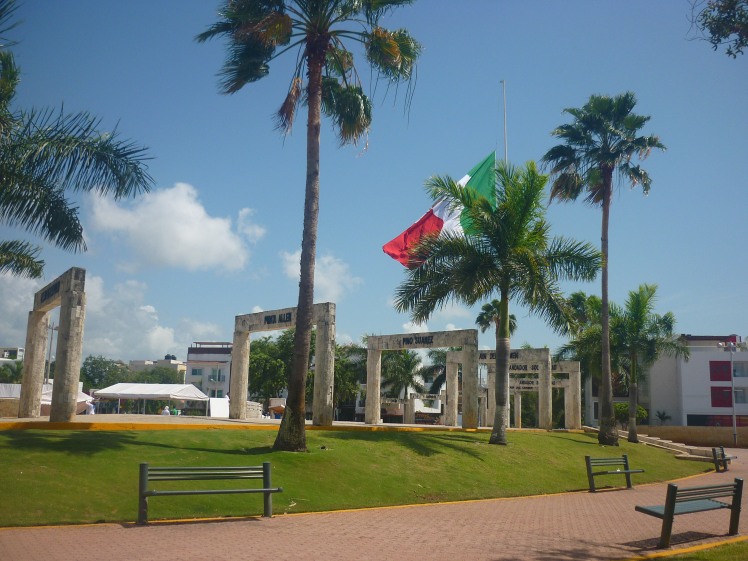 The polarity of that demonstration sums up clearly what we’re talking about here: backpacker zones, off the beaten path locations and everyday living, versus a highly commercialized tourist hub. While PDC is nice, I still wouldn’t recommend it to people who weren’t backpackers and were more the Fiji honeymooner type. Those who aren’t wanting to experience much of the culture, but instead want to stay somewhere fancy with plenty of amenities, and don’t mind the fact that it isn’t a true reflection of that country, culture or standard of living, are probably better off somewhere like the Maldives. It’s not that PDC isn’t beautiful in its own way, it’s just that the overpriced nature of everything there is so unreasonably obscene that it’d be silly to recommend it. So, you might be asking what constitutes “unreasonably obscene” and whether that’s just the backpacker talking. Rest assured, being from Australia we are more than used to expensive prices; in almost every category except for rent, NYC for us is good value bordering on cheap for many things. So when I say that PDC is unreasonably expensive, I’m talking about (in US dollars):

I mean, if these prices were an accurate reflection of Mexican life they’d all be rolling in money, there’d be almost no poverty, little reason for drug wars and probably a lot less murders, and M&M’s share price would be through the roof! It’d also mean that when I walk down the tourist streets of PDC, I wouldn’t be harassed every five seconds to buy drugs.

So while this post sounds negative, I just thought I’d highlight the obscenity of the place, given it’s a third world country. Saying all this, there are some nice hostels and hotels to stay at, but given that the beach is covered in seaweed, I can’t even recommend it to honeymooners. Maybe stop off for a full day and night to see it, but other than that, head for Tulum.

Our time in PDC wasn’t massively eventful: When we checked in, a security team swept into one of the rooms beside the rooftop pool we were swimming in and began clearing the rooms. Rooms above and below the room that a man and woman were staying in had to be checked out, presumably for occupants. After being given the all-clear, the man and woman entered. Started playing The Black Eyed Peas. For the remainder of that day, security stood outside their door and above on the second floor. They might have been famous, or infamous drug lords for all we knew, but outside of witnessing that bizarre scene, PDC was filled with food, late-night runs to 7-11, attempts to swim at the beach – only to be blocked by seaweed, and a day trip to Cozumel Island. Nothing in the way of culture really happened, but the tourists were flying through in hoards and the drug dealers on the streets were very open and loud about the products they were offering.

Our plans to go whale shark diving were interrupted by a strong hurricane, so our final days before flying onto America were spent doing what we did the first time we arrived – trying to find something to do, anything that was cultural or historical, in a place truly devoid of it all.